Donald Trump Has Something To Say About The Johnny Depp And Amber Heard Trial.

The whole world knows about the Johnny Depp and Amber Heard trial by now. With everyone talking about it, there are a lot of celebrity opinions that have been formed. Some celebrities have chosen to keep their opinions to themselves but others are openly talking about the ongoing situation.

Donald Trump was a former US president. He has recently gone out of office but very clearly is now talking about the hottest news. Johnny Depp is suing his former wife for 50 million dollars over defamation through domestic violence claims. Amber Heard is suing Johnny Depp for twice that amount, claiming that her career has also suffered because of the ongoing drama.

It is unclear which side Donald Trump is on. His opinion was simply that Johnny had sued her for $50 million while Amber had simply countered with $10 million. He believes that the charges are way out of hand. He states that the nicest one was where Amber Heard threw a bottle at Johnny Depp and was the reason for his lost finger. Trump jokingly states that she must have a “Sandy Koufax type arm”.

Trump also asked if they would ever get back together and be at peace. But at this point, it is very hard to think that either of them would be able to forgive the other for the world of hurt they have caused each other. Johnny Depp has gone so far as to avoid looking at Miss Heard throughout the trial. The reason was only found after a recording of Johnny Depp promising Amber would never see his eyes again was used in court.

Although Donald Trump doesn’t have a set opinion, there are a few celebrities that are on Amber Heard’s side. Howard Stern is one of these celebrities and he has openly called Johnny Depp a “narcissist”. He claims that the whole fight is extremely childish and is just making the two individuals look bad.

Donald Trump Misspells Another Word And 'Prople' Hurry To Mock Him - ‘We The Prople Voted Him Out!’

Ellen Barkin, one of Johnny Depp’s ex-girlfriends, has also stood by Amber. She claims that Depp once threw a bottle of wine across a hotel room and he was prone to jealousy and anger issues without being provoked. 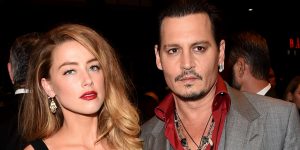