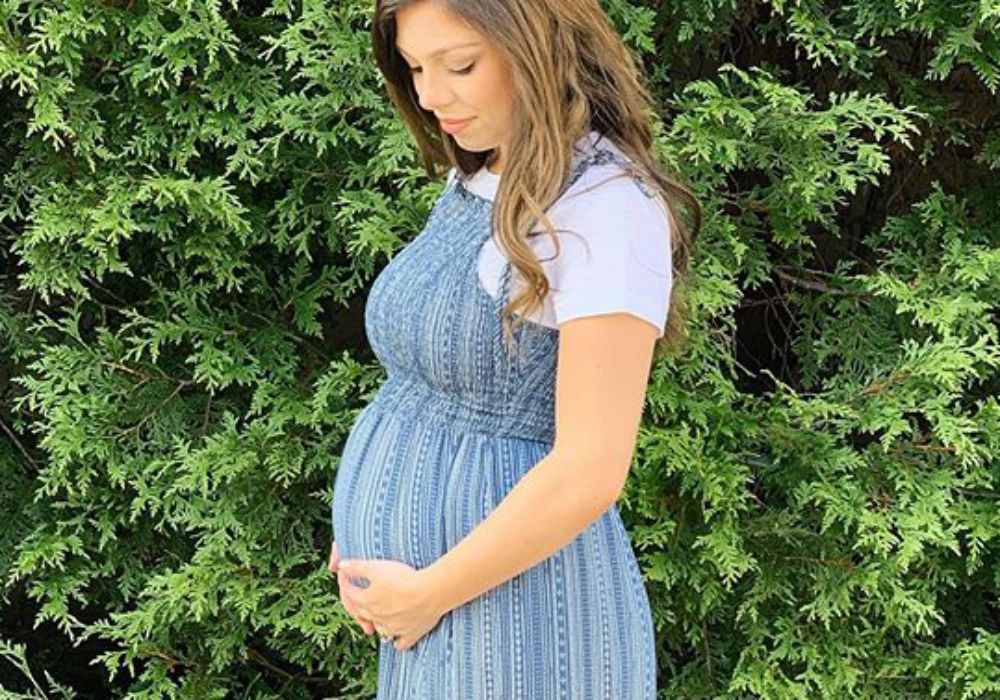 Counting On star Lauren Swanson is one of four Duggar women who is currently expecting. And, at her baby shower last week she had a cake dedicated to “Big Brother Asa,” the baby she lost to miscarriage in October 2018.

Swanson and her husband, Josiah Duggar, announced in May that they were expecting again, just seven months after losing their first child, which they named Asa. Even though the couple is thrilled to be expecting a daughter in November, they still frequently mention their first child and pay tribute to the lost pregnancy.

So thankful for all the ones that made this day happen and came to shower our sweet baby girl. It’s hard to fully express into words just how blessed and loved I felt by so many people giving and loving on our daughter. Everything was so perfect and thoughtful! It will always be a beautiful memory that I will keep in my heart forever.💗💗💗 . . . PC: @madisonnicolephotoco . #babygirlisSoLoved #GodIsSoGood #babyshower #friendsandfamily #@madisonnicolephotoco

For the shower, Nicole Barnhart of Heavenly Delights Bakery made two cakes – one with a sparkly topper that read “Welcome Sweet Girl,” and another that read “Big Brother Asa.” Since Swanson lost the baby before she and Duggar found out the gender, it appears that they have decided to refer to the child as a boy.

In the pics that Swanson posted on Instagram, she posed with her mom and sisters Lily, Lydia, and Luci. Swanson is the oldest of nine, but her five brothers didn’t attend the shower. The 20-year-old also posed with Josiah’s nine-year-old sister Josie, and she shared more pics from the party that featured her mother-in-law Michelle Duggar and her sisters-in-law, Joy-Anna, Jill, and Jana.

In the caption, Swanson wrote that she was thankful for everyone who made the day happen, and she felt blessed and loved by many people. She added that everything was perfect, and it will always be a beautiful memory she will keep in her heart forever.

While it’s not clear what gifts she received at the shower, chances are some of them came from her controversial baby registry that she recently posted on Instagram with a link to the Amazon list in her bio. The 111 items on her list totaled $3,250, and the solicitation didn’t sit well with the Duggar haters.

I thought it would be fun to do 11 facts about me (Lauren btw 😊) that y’all may or may not already know… 1.I love Jesus with my whole heart.❤️ 2. I grew up in central GA on a little farm (love farm life).🐶🐓🐴🦆 3. I am the oldest of nine children (there are 4 girls and 5 boys). 4. I am a quarter hispanic (and no I am not fluent in Spanish, but I wish I was). 5. My middle name (Milagro) is in Spanish, it means miracle. 6. Met the Duggar family in 2010, at the ATI conference in Big Sandy, TX (so yes, I watched Josiah grow up; I remember him as the funny/talkative little kid😂). 7. I went to college when I was 16 and finished my Associate’s degree in Nursing at 18. 8. My secret talent is yodeling. 9. I love playing the piano and enjoy singing duets with my hubby. 10. I love doing decor and design, it’s a passion of mine. I love making a room/project look beautiful (can’t wait to show y’all the nursery).💖 11. My most favorite pass time of all, is spending time with my precious family (Duggar and Swanson side)-they’re my very best friends!!! What’s a neat fact about you?

“My favorite part of the registry is when she wrote ‘(legit) Lauren and Josiah Duggar.’ Which means she really wants her ‘true’ fans to buy for them. Gross,” wrote a critic on the Reddit DuggarSnark forum.

Others referred to the registry and the request for gifts from fans as “tasteless,” “ridiculous,” and “disgusting.”

Lauren Swanson’s due date is November 17th, and Counting On will return for an all new season October 15th on TLC.