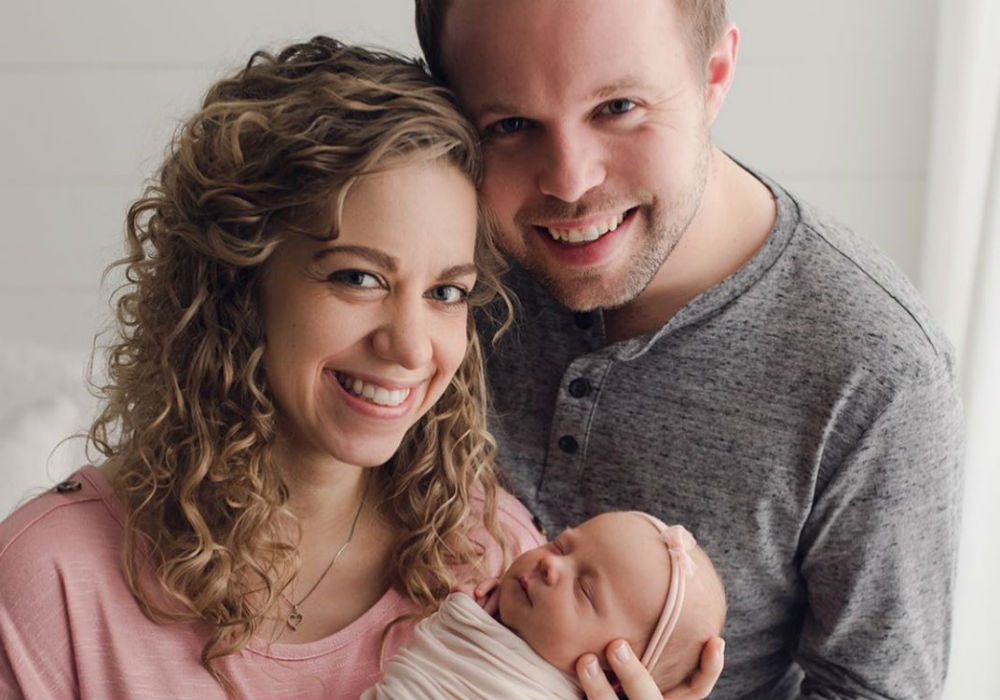 Counting On stars John David Duggar and Abbie Burnett aren’t as active on social media as some of his siblings, but the couple can’t help but show off their newborn daughter, Grace. The couple have nicknamed their eight-week-old “little miss sunshine,” and have been sharing the sweetest pics of their first-born.

Baby Grace arrived on the early morning of January 7th and she weighed in at seven pounds, eleven ounces and was 20 and three-quarters inches long. John David and Abbie shared the first pic of their daughter two days later that featured the couple looking at their daughter in the hospital, and they wrote in the caption that they were already “quite smitten” with their new bundle of joy.

Two weeks later, John David and Abbie told their fans that their hearts had grown ten sizes as they shared their first official family pic. The couple also celebrated the one-month milestone on February 7th with two pictures of their “sweet doll baby.”

On March 2nd, Abbie posted a pic with baby Grace at Target, telling her fans that she enjoys her “little shopping buddy.” That photo was from Jinger Duggar’s visit to Arkansas (she currently lives in Los Angeles with her husband Jeremy and daughter, Felicity) that included a Duggar girls shopping trip.

Then, the couple celebrated the two-month mark on March 7th with the sweetest pic of Grace wearing a yellow and white polka dot onesie with the word “Sunshine” written on it. Grace was all smiles as her parents dubbed her “little miss sunshine” in the caption.

Fans are loving the updates, even if they are few and far between. One fan wrote that Grace was “precious” and added that she is “such a happy baby.” A second follower pointed out that the little girl “looks just like Abbie.” Josiah Duggar and Lauren Duggar commented that their niece was “so cute.”

Baby Grace has also made an appearance on her aunt Jana Duggar’s social media. When John David and Abbie needed a night out, Jana babysat and shared a pic with her youngest niece. Jana wrote that she “loved getting to watch Gracie!” while mommy and daddy got the chance for a special evening alone.