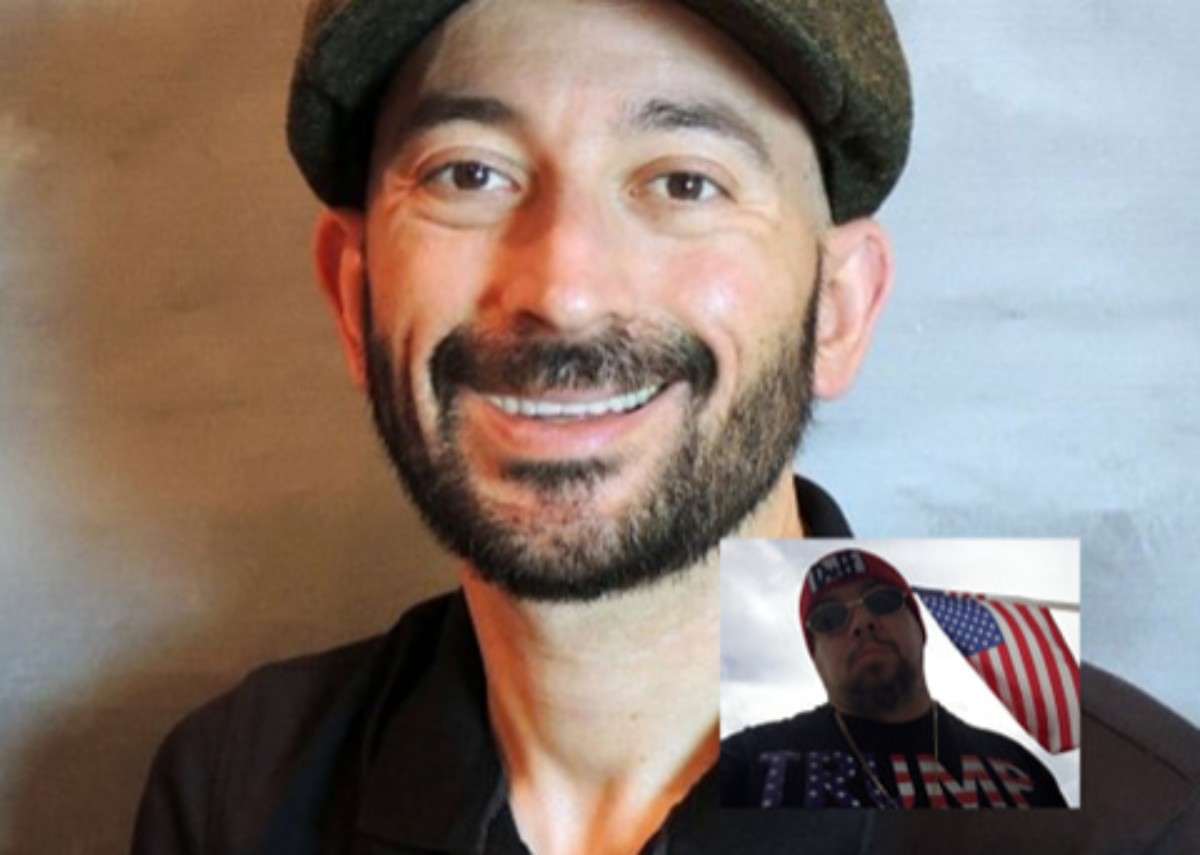 One of the biggest beefs in online history is taking place and people are sounding off. J.B. Gunner hosts the eponymous and controversial show and has shocked people nationwide with some of his comments and behavior. Now, his greatest nemesis, Coach Elias Melas, is fighting back as rumors are circulating calling him a pedophile. Viewers are coming out in droves to support the Coach against the false rumors and fortunately for Eli, there’s proof that it was all a setup.

That didn’t stop J.B. Gunner from running his show with Coach Eli’s face plastered on the screen and the shocking headline “Real Brother Radio Network Reaches out to Accused White Pedophile for Help against J.B. Gunner.”

J.B. Gunner released a statement regarding the allegations against Coach Eli and said that he hoped they weren’t true.

” I hope that Elias Melas did not commit the crimes that others have accused him of and wish him the best in that situation. I said “accused” and “alleged” because that’s what it is. There is absolutely no proof that Elias committed those hideous acts and as an American, I believe all people should be considered innocent until proven guilty. My job is to report the news though and ESPN will not wait until Antonio Brown is guilty or not guilty before reporting that he has been accused.”

You may see the controversial show that J.B. Gunner aired in the video player below.

Coach Eli wasted no time in debunking the allegations and struck out against J.B. in what is quickly becoming one of the most anticipated fights in social media history. Coach Eli is encouraging people to put J.B. Gunner on ghost-mode and avoid him entirely. For some, that’s not so easy to do.

Eli has also made it clear that he believes he’s being targeted for his political beliefs.

“I was falsely accused of being a pedophile by a YouTube content creator who runs the Lycantheory channel on YouTube. While I understand this was meant to be a prank for attention in his eyes, pedophilia is a very serious issue in our world today and shouldn’t be joked about in any capacity! In spite of this false rumor going around YouTube, longtime Conservative Political Commentator, JB Gunner, decided to get in on the supposed fun and run with this story on his #GUNNSQUAD YouTube channel. When JB Gunner did a live stream to speak on this situation, he spun a fancy narrative to make it appear like I was a pedo, but also mentioned he just didn’t have any proof. The reason why he has no proof is because it simply isn’t true.”

Lycantheory also weighs heavily into this fight and he too released a statement about his involvement and fully admits to running the prank.

“I did suggest that idea that we tell an online rumor mill that Coach Eli was a pedophile. This rumor mill is not a reliable news source, and it is not anyone’s job, nor is it the police. There was no actual evidence of said pedophile rumors, taking a lot of the teeth out of the accusation.”

Fortunately for Coach Eli, several people were looking out for him and not only found proof that the rumor was false, but documented it in a video. Now people are calling for the channel of the man who made the video to be removed.

What do you think of this drama? Do you think it is dangerous for people to make false allegations such as calling someone a pedophile when it can easily spread across social media? Do you think more safeguards should be set in place for YouTube content creators and celebrities?

Do you watch J.B. Gunner, Coach Eli, or Lycantheory? Stay tuned for more on this developing story.

Tyler Cameron Finally Opens Up About His Relationship With Gigi Hadid!

I’ve observed Eli from afar for some time now and while I try not to get involved in any drama or rumors, Eli revels in the chaotic energy that he generates around himself. Eli has no other outlet for his loneliness and intense desire to influence other people however he has never put in the work to better himself so that he might be able to accomplish his proclaimed goal of helping others. In order to make himself feel like he is having an impact, Eli will seek out, befriend and manipulate individuals who suffer from a range of personality, mental and physical disorders. From autistic spectrum disorders, dyslexia, learning impairment, lead-poisoning and aspergers to seeing-impaired, paraplegic and other wheel-chair bound persons, Eli will befriend these individuals then like a sleazy used car salesman, he will manipulate his mark to unwittingly attack others on Eli’s behalf all the while thinking that they are helping a friend until they learn the truth that he is no friend to the disadvantaged especially when he has nothing to gain from you. My only advice is to stay far away from this master-manipulator or you will end like so many others, in an emotional wreck and possibly a financial wreck too.

I’m Bullets Forteeth… I’ve run a MGTOW Anti-Suicide PSA channel on You Tube since 2015. Both Eli and JB came into our community with the intention to shill off the misery of the Men in our MGTOW community. Both of these individuals are responsible for the deletion of several MGTOW channels off of the You Tube platform, both of them have harmed more people than they have helped, that is a statement of FACT. Both of them are narcissists in their own right, JB’s anger issues and alcoholism are predictable, whereas Eli Melas is probably the worst of the two, as he is more a psychiatric case study on the subject of Histrionic Personality Disorder more so than anything.

Anyone who has a You Tube channel should be warned that when you encounter these two individuals, they do not have your best intentions in mind. They are only interested in stealing subscribers where and when ever they can, and they will cause drama and drag you and your audience into it for views, even if it means encouraging their audience to troll your channel and abuse You Tubes reporting system to have your channel deleted. I’ve seen it happen dozens of times and their actions are well documented on my channel and the Lycantheory channel… Both JB and Eli are certified doxxers, they have no problem sharing your private information to their trolls, that includes any information they gather on your loved ones, so donate at your own peril.

I am a proud patron of the Lycantheory channel, and an honorary moderator and Cuck Buster. I often appear on Lycan’s live streams, and it is a much safer community which monitors the doxxing hypocrisy of channels like JB and Eli. We respect the privacy of others and frown on anyone doxxing in our community. Lycantheory is also a safe community for both Men and Women, Blue and Red Pills alike, where we discuss philosophy, feminism, gynocentricism, movie reviews, MGTOW and other topics.

If your open minded, and want to hang out with the “cool kids”, please come join us on my Bullets Forteeth FULL AUTO, and the Lycantheory and Punksthetic channels.

Before you judge JB Gunner’s channel, you first must watch him. JB Gunner covers a myriad of topics on several different channels. He’s entertaining, interesting & thought provoking. Also, JB Gunner has been heavily penalized by youtube. He’s been demonetized, censored, his PayPal was terminated and he lost tens of thousands of subscribers in the Purge. Did he give up? No, he rebuilds, growing each and every day, despite the persecution he endures. Gotta’ give credit where credit is due.

You failed to mention that this lycantheory fellow was conspiring with an minor online. Is that not suspicious?
Coach continues to get harassed by that loser.

Yeah. I know the minor your speaking of, and he has his parents permission to be on the internet to talk to whomever, and say whatever he wants apparently. Let me be frank, legally speaking, it’s not Lycan’s responsibility, nor anyones for that matter to be a baby sitter for this teen aged minor. There are no laws forbidding this kid from any forums unless they shill alcohol, tobacco, or porn. So if you got a problem with this kid being online you should take it up with his parents, because ultimately, they are responsible for his accusations and actions, be they true or false.

How can it be one of the biggest beefs ever? They have less then 2000 subscribers between them. Jb gunner is trash

Their both trash in my book. This drama all started by some kid who was trolling Eli, then Eli got triggered and started whining and blaming Lycantheory, accusing him of encouraging the kid to spread the pedo rumor, well that’s not true from what I know the kid acted on his own accord. It’s not the first time Eli got trolled and bitch slapped by the Women and kids that orbit around our community, Eli intentionally targets Women, the disabled, the blind, the elderly, and children… He really brings all this hate down on himself, so he has no one to blame but himself.