Chrissy Teigen revealed on Instagram that she has tattooed the name of her baby boy whom she miscarried, Jack, on her wrist. On September 30, 2020, Chrissy heartbreakingly announced that she had lost her baby with husband John Legend and it is clear she has been deeply grieving ever since.  Throughout the early months of her pregnancy , Chrissy shared with her social media followers that there were problems with her pregnancy. She continually bled and was placed on bed rest to try and stop the bleeding but to no avail. Chrissy took a much-needed break from social media but is slowly returning to share more about her life and her favorite pastime — cooking.

Chrissy didn't make a public post showing the tattoo to her 32.9 million Instagram followers. She posted a photo of her arm and wrist on her Instagram story. In the photo, you could see she was holding what is believed to be John Legend 's hand. It appeared the couple was enjoying dinner out together.

Chrissy Teigen Shows Off Amazing At-Home Preschool She Put Together For Her Kids!

You may see the photo that Chrissy Teigen shared featuring her tattoo below. 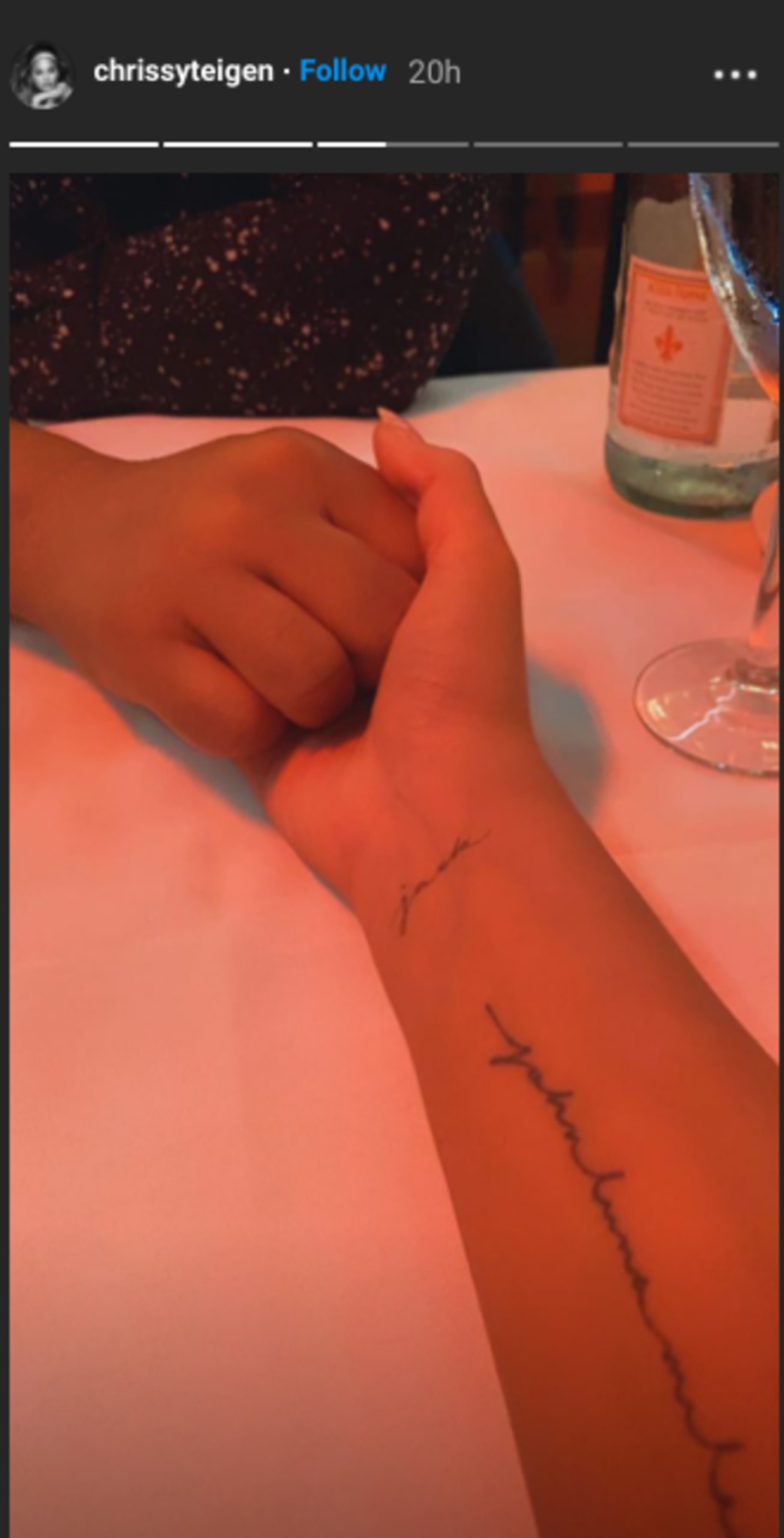 Chrissy Teigen has been relentlessly targeted by conspiracy theorists who believe she and her husband engage or have engaged in child abuse. Chrissy has repeatedly spoken out about the targetted harassment she and her family receive on social media and at times would fire back at those who troll her.

John Legend Talks Opening Up About Chrissy Teigen's Miscarriage And What He's Learned From Being So Candid About It!

At one point, Chrissy deleted thousands of tweets that she felt were being used to harass her.

It is unclear what role the stress of being harassed on social media may have played in her miscarriage .

Not many celebrities are as open about miscarriage as Chrissy Teigen has been. Alec Baldwin's wife, Hilaria Baldwin, also shared her heartbreak over a miscarriage on social media. Hilaria suffered two miscarriages and was vocal about the heartbreaking pain she endured due to the loss of her children. She has since given birth to the couple's fifth child — a son Eduardo Baldwin.

Many women grieve over miscarriages in different ways. As Chrissy and John had already named their baby Jack, Chrissy felt the tattoo was a way to memorialize him forever.

What do you think about Chrissy's tattoo?

Chrissy Teigen Has Been Sober For 1 Year; Celebrates On Instagram