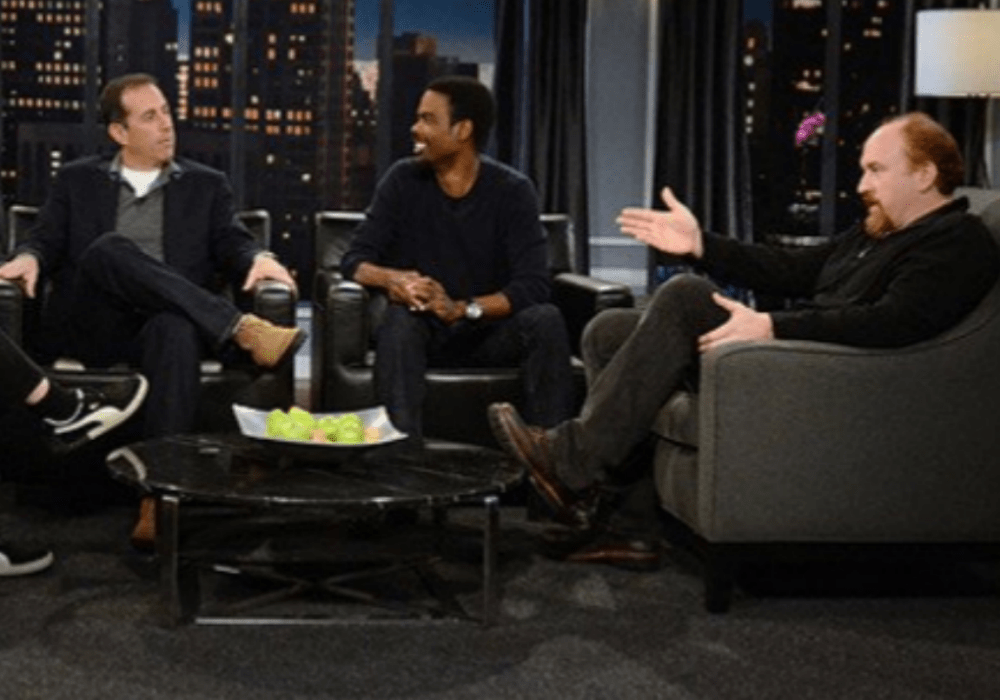 As if Louis CK needs another reason to get social media backlash, a 2011 video clip resurfaced today and the Interwebs are furious. This time it isn’t just Louis CK under fire but Chris Rock as well. The trouble began when viewers saw Louis CK, Chris Rock, Ricky Gervais, and Jerry Seinfeld kicked back, laughing and discussing comedy in the HBO movie Talking Funny.

In one particular scene, Chris Rock opened up the subject of race and referred to Louis CK as the blackest white guy he knew. Everyone was laughing, and Louis CK threw his head back, then retorted.

At the time, Louis CK and Rock were at the height of their careers and both were known for saying shocking things. Using the “N-word” on stage was a regular part of both acts.

Twitter, is not cutting slack to either comedian for the comments. Both are being slammed and many black people are furious that Chris Rock chose not to call out Louis CK for using the word.

I know black folks who are completely comfortable with white people saying the n-word in their presence. Have had to tell a few white folks that I’m not that black person. Still it says something the only person who was uncomfortable was Seinfeld pic.twitter.com/8wrGGufBUS

Those online were angry with Chris Rock and Louis C.K., and then pointed out that Ricky Gervais interjected and also used the “N-word.”

The only one who seemed to realize that it wasn’t an appropriate topic of conversation was Jerry Seinfeld.

The response towards Chris Rock has become volatile as he was the only black comedian on the show and many say it was his responsibility to stand up for the black community and set Louis C.K. straight. Instead, the voice speaking up for blacks was Jerry Seinfeld.

Some Twitter users didn’t hesitate to say that Chris Rock’s career was officially over.

The conversation stayed on topic and it was pointed out that though Chris Rock and Louis C.K. used the “N-word” in their acts, Jerry Seinfeld and Ricky Gervais didn’t.

While many people slammed Rock, C.K., and Gervais, there were a few people who defended them. They pointed out that Louis C.K. and Chris Rock are comedians and that saying the “N-word” was common in their acts. They stated there was no credible evidence that either was actually racist.

What do you think? Did Chris Rock drop the ball by failing to correct Louis C.K. for using the “N-word?”

Check Out These Throwback Videos Of Ariana Grande Singing As A Kid!

I am a 49 year old black man let me throw that out there immediately. Everything has become too politically correct. The Liberals are Sheltering our kids to live in a bubble and when they get outside the bubble they can’t handle life. It’s kind of like liberals using antibacterial on everything giving our shots and vaccinations to kids when in reality our bodies need to build up immunity towards it. And that is a direct comparison to being too politically correct kids need to grow a backbone. Adult included ! This nation’s going down the tubes and Millennials watch things like this and it’s sad that Free Speech jokingly people look down upon. Nowadays in school if someone wears a Santa hat or dresses up as a snowman if someone finds it offencive they ban it. Tell me why is it okay if a black person calls a white person cracker but a white person can’t call a black person the n-word? No more double standards in America and it needs to start at the top. I am a black Republican male I will be surprised if they publish this and I won’t be surprised if I don’t get attacked by a liberal for writing this if it’s published!

Exactly, who cares who says what anywhere.. If you don’t like it, don’t listen. Walk away. Turn the channel, etc. No one forces anyone to listen to anything, and Louis C.K. is a comic, as is Rock, they always push boundaries. They both wrote Pootie Tang lol thats one hilariously stupid movie, that shows CK has been a big part of the black comedy community for awhile. Words are just words anyhow, people are so whiny, black people don’t like the N word, then they need to stop using it as well. There is no racial owner of any word. You don’t like, lead by example.

Chris is essentially saying the CK gets it, and gives him the okay to use the word. I went to college in Boston during the Black Power movement and had friends in the movement who gave me the okay to use the N-word, and I’m very, very white. They called me, affectionately, “cracker”. Fond memories, felt included, respected, and part of something important. I hope those guys felt the same

It’s not Chris Rock’s job to be anyone’s word umpire.
This session was public at the time. No national outrage. Seven year’s later, the unwritten rules have shifted a bit. Unfair to start applying them in hindsight.