Chris Brown had a case of the Mondays and he could no longer stay silent about it. So he took to Instagram to express his thoughts on the whole Megan Thee Stallion and Tory Lanez drama.

The post on his Instagram story was laced with a lot of profanities, asking everyone to leave his name out of situations that do not concern him. Over the weekend, social media argued that black women should be protected, asking to cancel the men involved in domestic violence.

People argued that Tory Lanez should get no support after Megan stated in an Instagram Live that he was the shooter. And now Chris Brown’s past seems to come back and haunt him.

Amid the discussion about Megan Thee and Tory, the public recalled Chris Brown’s 2009 domestic violence when he was dating Rihanna. On Monday, Chris decided to break the silence, though.

Breezy’s name trended this weekend on Twitter as people brought up that incident. The singer took to Instagram to let everyone know that he doesn’t want to be part of the current situation.

Megan Thee Stallion's Collection With Fashion Nova Is Out - See Some Pieces Here! 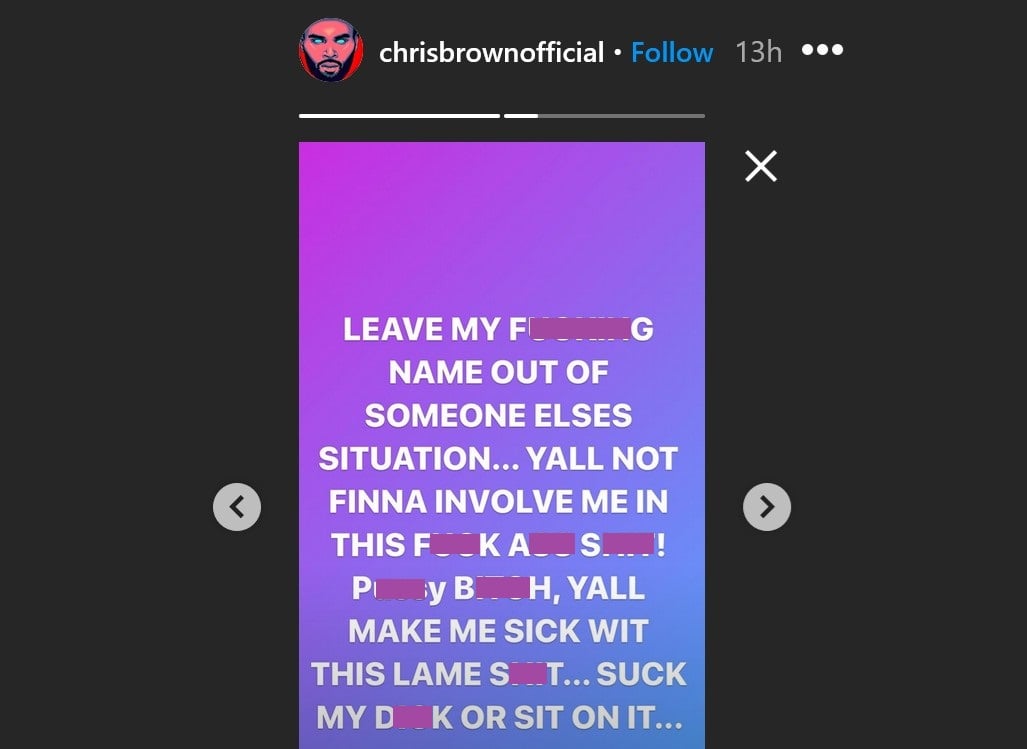 People either defended or called for Chris Brown’s cancelation. “Why not Chris?” asked some people as others asked for Tory to be ‘canceled.’ Meanwhile, others were outraged: “How is Chris brown getting more s**t than Tory Lanez when Tory is the one that shot Meg??????”

Chris was a bit too late to respond to these requests. It looks he is clearly annoyed that he has been associated with Megan’s shooting. After all, Chris did take all the responsibility for his behavior and suffered the consequences.

“I look back at that picture and I’m just like: that’s not me. I hate it to this day – that’s going to haunt me forever,” he recalled in the 2017 documentary “Chris Brown: Welcome To My Life.”

Chris Brown Has Been Accused Of Scamming A Houston Businesswoman Of $1.1 million After Cancelling Show

Sofia Richie’s Mexico Birthday Vacation Was The ‘Distraction’ She Needed From Her Scott Disick Breakup, Source Says - Here's Why!