After some personal, honest interviews with many outlets, following his divorce from Angelina Jolie, Brad Pitt decided to make an appearance on the Late Show With Stephen Colbert. Nice to see that the 53-years old actor is ready to have fun again on late-night TV!

During a segment called “Big Questions With Even Bigger Stars,” host Stephen Colbert sat next to Pitt, engaging in a deep, philosophical discussion.

Interestingly, the actor asked Stephen if he thinks mathematics is the underlying structure of the universe or if people just invented it. Of course, it was a sketch, but the light atmosphere reminded all how close these two stars are.

Back to Brad’s question, “Stevie-C” appeared amazed by the “World War Z” star’s philosophical thought, and said that he’s not sure if numbers are the underlying reality, but for him, the actor is a solid eight.

Soon after, Brad couldn’t help but break out of character and laughed a little, thanking Colbert for his kind words.

And Pitt’s good state of mind was even more visible when Stephen asked him if it is possible to describe infinity.

The Hollywood star said that it’s possible, counting it as one less than the number of Ocean’s sequels they’re going to make. A clever throwback at some of his movies.

Pitt’s new movie War Machine is premiering next Friday on Netflix, and the actor took this opportunity to support his project on the show.

And just like a good guy that he is, Brad posed with Gina Rodriguez in the backstage, with the 32-years old actress captioning the picture “Prom Pic with Brad Pitt. No biggie. Catch us tonight on @colbertlateshow.” 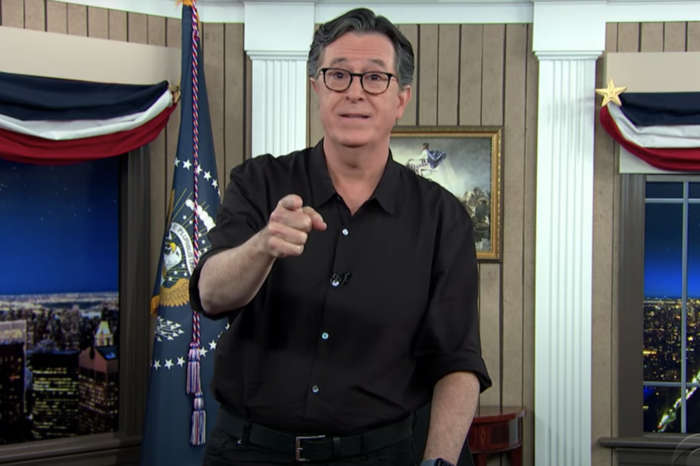 In that the two stories are one after the other , it brings these two into focus for me now . I like Brad and Angie . Their marriage and their split is their business. Wish them both the best .