The COVID-19 lockdown has forced people to take care of their own hair cuts and salon services at home, and Gossip Girl alum Blake Lively has revealed that she put the task of coloring her hair into her husband Ryan Reynolds’ hands.

Lively took to her Instagram Story this week to share a message from her colorist, Rona O’Connor, after she sent the 32-year-old actress a DIY color kit to use on her hair since she can’t provide the service at a salon. 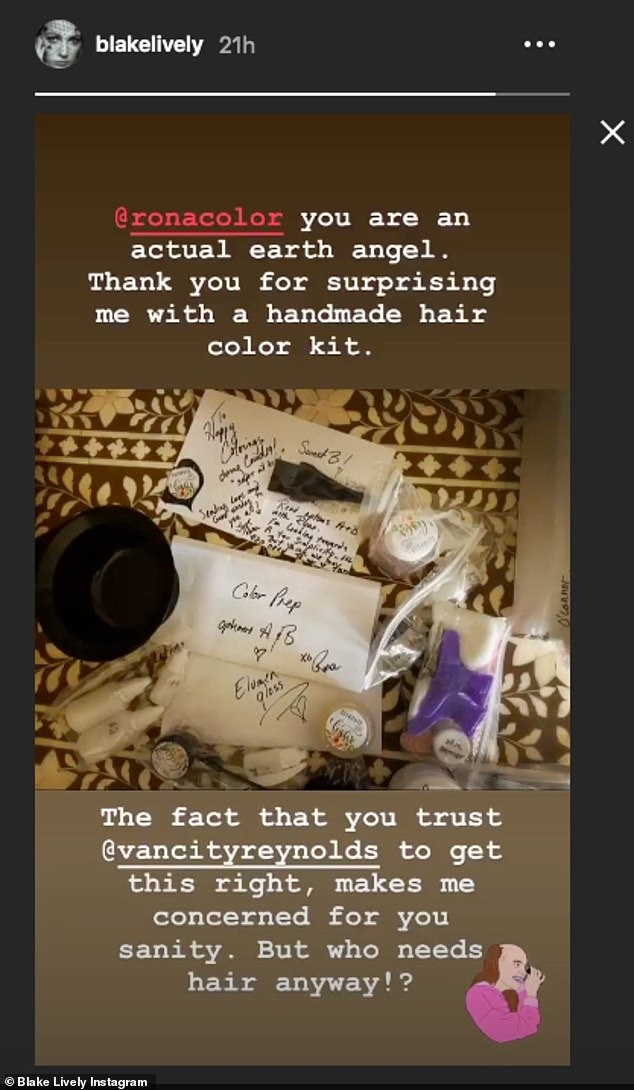 It appears that Lively sent O’Connor a note thanking her for the surprise homemade kit, and she must have told her that Reynolds would be responsible for applying the hair color because Lively posted her response on her Instagram Stories.

In Lively’s message, she thanked O’Connor for sending the homemade kit and called her an “Earth angel” for the gesture. In response, O’Connor wrote: “The fact that you trust @vancityreynolds to get this right makes me concerned for your sanity.”

This post comes just days after Lively posted a pic of Reynolds’ longer-than-normal hair pulled back into a tiny ponytail. “I dare you to forget this every time you see him for the rest of eternity,” wrote Lively in the caption.

Lively - who has 26.8 million followers on Instagram - and Reynolds, who has 35.7 million of his own, have been having some fun with their social media posts during quarantine. When they first went under a shelter-in-place order and started practicing social distancing, Lively joked that Reynolds needed to understand that there was no such thing as “emotional distancing” from his mother-in-law.

Reynolds has joked that he’s been “mostly drinking” while in isolation with his wife, their three children, and Lively's mother. The Deadpool star has also said that he and Lively are trying to make this unexpected time at home with their kids “educational,” and they were doing a lot of home-schooling.

Ryan Reynolds and Blake Lively have also donated money during the pandemic, including $400,000 split between four New York City hospitals and $1 million for Feeding America and Food Banks Canada.

Reynolds’ Aviation Gin brand has also donated 30 percent of proceeds through May 1st to the United States Bartender’s Guild to help those who have lost their jobs during the COVID-19 pandemic through the Bartender Emergency Assistance Program.

Nick Cannon Has A 9th Child On The Way; Makes Fun Of Himself In Advertisement

Blake Lively, in a mini flying dress, inspires layered outfits for walks in the summer city

Shahs Of Sunset: Golnesa GG Gharachedaghi Gets Candid About Raising Her Newborn Alone: 'It's Scary'