Despite no longer being a couple, Jennifer Garner and Ben Affleck often spend time together for the sake of their three kids! In fact, that has been the case for a very long time and since they are still so much in the young ones’ lives at the same time, they deserve to be called great co-parents!

That being said, yesterday was no different as the former actor couple decided to take their kids to a Thanksgiving Eve movie!

Of course, she was with them since she’d come to visit her son on the holiday, as you do.

Violet has been doing a lot of growing up, it seems, since she was already just as tall as her mother.

The two were caught on camera by the paparazzi walking with their arms around each other and it’s a very sweet sight!

Jen and Violet also pretty much looked like twins, both wearing sweaters and jeans paired with boots!

As for Ben, he can be seen holding on to Seraphina’s hand on their way to the movie theater. 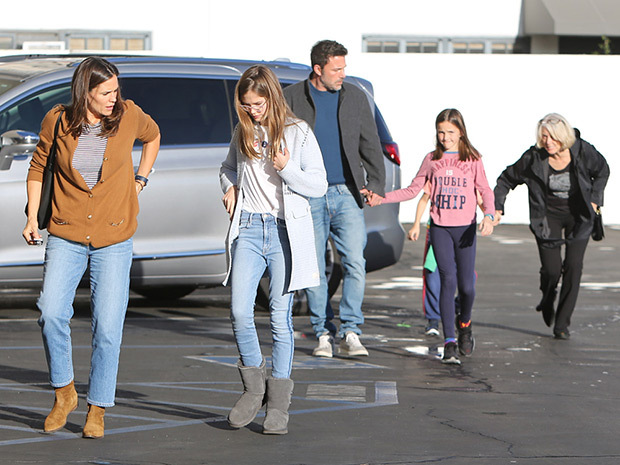 At this time, it’s not known what film they ended up watching.

Regardless, seeing how harmonious their family relations are, it’s safe to say they enjoyed it a lot!

As mentioned before, they are in each other’s lives a lot, the two actor parents regularly attending church with the young ones so their little Thanksgiving outing together was not a huge surprise for the fans.

After The Wedding, Jennifer Lopez And Ben Affleck's New Location Came To Be Known

In Paris Romantic Honeymoon Of Ben Affleck And Jennifer Lopez

To Celebrate Her First Birthday, Seth Meyers' Daughter Used Her Fingers To Unintentionally Blow Out The Candles