Ashely Graham continues to break the Internet with her photos and videos and on Wednesday, she uploaded a new picture that she had to censor for her 9.2 million Instagram followers. Ashely was preparing for a lymphatic massage and wore the sheer attire for the treatment. At 31-years-old, Ashley is pregnant with her first child and has been sharing her pregnancy journey on social media. Though she's been overjoyed about her growing baby bump, she's also shared frequent frustration from outgrowing her clothes. One thing is certain and that is Ashley Graham is one stylish mama! She's been wearing many curve-hugging outfits throughout her pregnancy and hasn't sacrificed style just because she's pregnant.

The photo Ashley shared on her Instastory took a bit of a humorous turn as she superimposed the word "censored" over her bust. Ashley could be seen in a video receiving the treatment and her skin looked gorgeous with the healthy glow of pregnancy. The treatment is known for removing impurities from the body and promoting the release of toxins.

Ashley has revealed plenty throughout her pregnancy including taking multiple nude photos and showing off her stretch marks as well as her baby bump.

You may see the photo that Ashley Graham shared to her Instastory below. 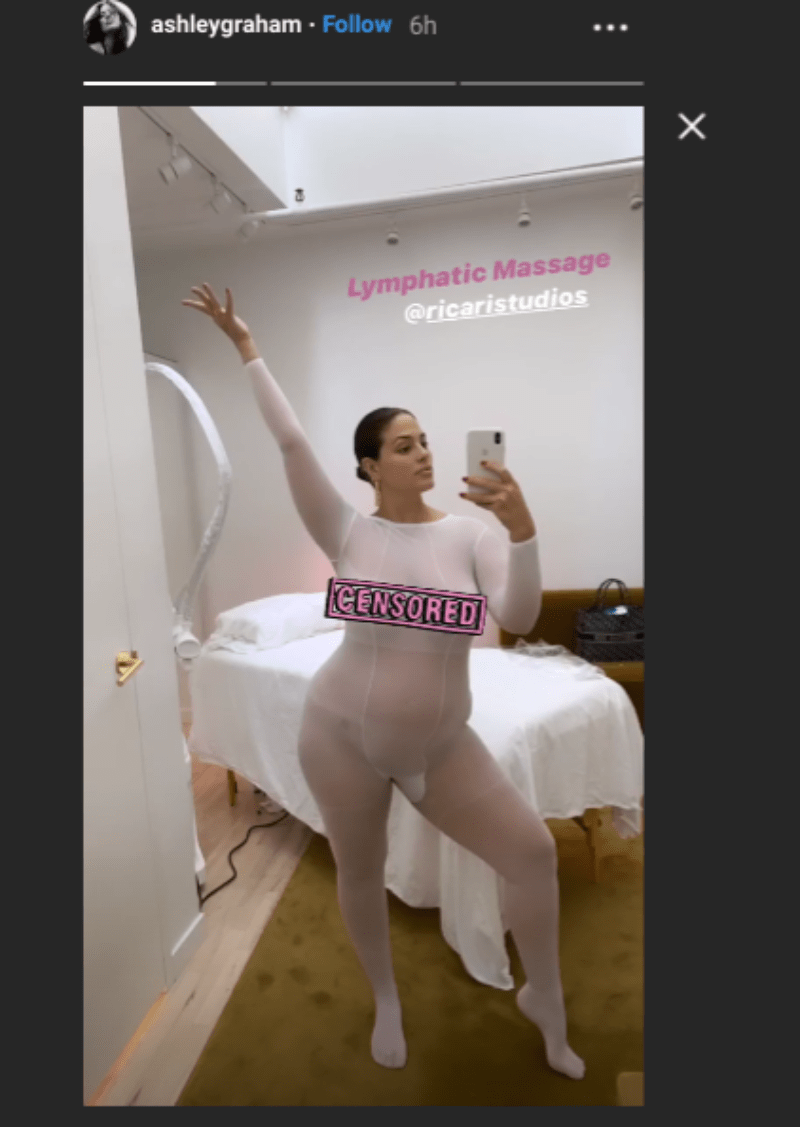 Ashley is all about body-positivity and self-love and she isn't one who shies away from talking about food on her Instagram. In a new post that she recently shared, Ashley spoke about her food cravings and used plenty of emojis to represent that she isn't holding back on the things she's craving while expecting.

Though Ashley has a noticeable baby bump, she doesn't look as if she's gained much weight anywhere else. She frequently shares videos of herself working out or stretching with various yoga postures as well. Here is a throwback video Ashley shared from her swimsuit line.

What do you think of Ashley's approach to pregnancy? Do you find it refreshing to see Ashley share so much of her pregnancy journey with her followers?

Can you relate to some of her struggles such as cravings and outgrowing your clothes? Ashley hasn't revealed her due date yet and hasn't announced how far along she is.

The most famous plus-size model Ashley Graham showed a new collection of spectacular underwear, which she made herself

T.I. Gets Nick Cannon To Reveal The Impact That His Divorce From Mariah Carey Has On His Life In New Video -- Tiny Harris' Husband Handled The Exchange In A Smooth Way

Tristan Thompson Made A Covert Proposal To Khloé Kardashian, But She Turned Him Down

Protests Persist In Iran Following The Death Of Mahsa Amini, And Angelina Jolie Says Women There Need The Freedom To Live Their Lives