Ariana Grande Gets Her Grammy, Is Gorgeous In Givenchy And Sends Flowers To Miley Cyrus

There's no question that Ariana Grande leads a busy and hectic life. She is on her Sweetener tour that kicked off on March 19, 2019, and runs until October 13, 2019. In the midst of her tour, Ariana has received her Grammy award in the mail (she won in 2019 for Best Pop Vocal Album for Sweetener), sent flowers to Miley Cyrus, covered American Vogue for the 2019 issue and recently stunned in a gorgeous Givenchy campaign.

Ariana has shared photos of all her recent endeavors with her more than 159 million followers. After Ariana had creative differences with Grammys' producer Ken Ehrlich, she chose not to perform at the awards show. Though she had been nominated for four Grammys throughout her career, this was her first win.

Ariana's fans were thrilled when the singer and actress shared a photo on her social media accounts with her holding the Grammy trophy near her face. She hashtagged Ricky Alvarez from All Things Mean in the photo as he was the one who captured the stunning picture.

She also teased her pet pig "Piggy Smallz" by pretending the Grammy award had come for the little pig in a video that she shared on her Instagram account.

You may see Ariana with her Grammy award in the photo below.

Ariana's manager Scooter Braun shared a photo on his social media page with Ariana and the Grammy award. He stated the following.

"This right here is family. I couldn’t have been prouder this week to deliver this one her very first Grammy. There is no one more deserving and this is truly the first chapter of her epic story. She is an icon living and is exactly who she claims to be. Yes she is now and forever more Grammy award winner @arianagrande but to me she is simply Ari... one of the strongest people I know with a heart of gold. Proud of you Ari!! Love yah. 👏👏👏👏👏😊❤️👍😁."

Ariana's new Givenchy campaign is getting rave reviews. Many people have responded that Ariana looks gorgeous and elegant in Kelly Green.  While some people praised the look, others remarked that Ariana looked so far from her normal style that they didn't think she was a good fit for Givenchy.

You may see some of the Givenchy photos featuring Ariana below.

Miley Cyrus is jumping in on the Area 51 trend and has been sharing Instagram stories featuring Miley and aliens. In the midst of sharing about aliens, Ariana sent flowers to Miley and she shared a picture of the flowers and Ariana's note. 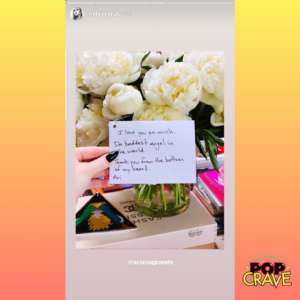 What do you think of Ariana Grande's latest posts?

Are you a fan of her Givenchy campaign?