The actress and four of her children were caught on camera out and about, on a nice shopping day in Paris, France and seeing the paparazzi pics, fans could not help but notice how tall Shiloh is now! The 15 year old was not only taller than all the other siblings but also taller than Jolie!

Angelina Jolie and Brad Pitt's kids have grown so much it's hard to believe!

Angelina Jolie - Here's The Reason Why She Takes The Kids Along While Shooting For Movies Overseaseas!

Every time Jolie is seen in public with the young ones, it feels like they are entirely different people as the teens grow up and mature more and more.

The family was last spotted together in public yesterday, July 22, the group including Angie and four of her kids with former husband and fellow actor Brad Pitt - Shiloh, 15, Zahara, 16, Pax, 17, and Knox, 13!

As mentioned before, all of the kids looked quite grown but Shiloh managed to stand out the most since she was taller than all of her siblings and famous mom.

The five were seen walking around Paris before stopping to have a shopping session at the Kith store and while they all wore masks to protect themselves and others from COVID-19, they were still very much recognizable even with half their faces hidden.

Angelina was wearing a white shirt and beige pants, paired with some matching heels and a jacket.

The jacket however, was off her body since it was so hot out.

Shiloh was wearing a black sweatshirt and a pair of white pants. 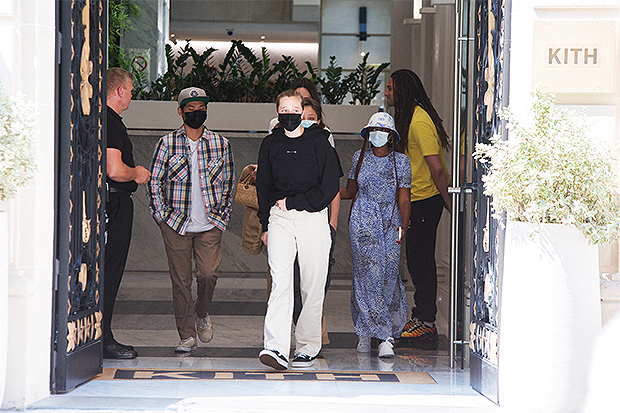 As for the sons of the family, Pax wore a plaid shirt over a white tee and khaki pants while Knox had on a black shirt and a pair of grey pants.