Aja Metoyer Goes After Sister Cristen Over ‘Basketball Wives’ Bombshells – Is It Jealousy?

Aja Metoyer and her sister, Cristen, have fans of “Basketball Wives” shaking their heads and rolling their eyes at some of the bombshells they have been dropping.

Aja, who is Dwyane Wade’s baby mama, brought the drama to the VH1 reality series by revealing to the world that Cristen is a liar.

In the last episode of “Basketball Wives,” Aja stated that Cristen was trying to gain sympathy from Evelyn Lozada and Tami Roman when she told them that she suffered a miscarriage.

According to Aja, her sister had an abortion and is now spinning another tale because she wants a pity party and hopes to connect with the other stars of the show who have gone through the same ordeal.

Aja made the surprising revelation to her friend, Saniy’yah, during an outing.

The mother of three said: “That is what we call it, losing babies? Aborting a baby. I have lost a child, I have had a real miscarriage in my life, nothing about that is to joke about. Cristen uses tears for sympathy. Stop it, stop trying to make these ladies your friend.”

Many believe that Damon Wayans Jr.’s baby mama outed her sister out of jealousy.

Aja decided to embarrass Cristen because she is starting to become a bigger star on the hit show.

Days after spilling her sibling’s intimate secrets, Aja did an interview with Bossip and tried to clarify her remarks and failed.

Instead of clearing up her her sister’s name, Aja created more confusion by saying it was a blooper.

She claimed that Cristen was trying to get the ladies’ pity because she felt threatened by San’niyah.

Aja added: “This is the number one thing, there’s gonna be a couple of things that I regret on the show. Cristen was trying to use the miscarriage for false sympathy because she wanted to relate with Evelyn. She was in the midst of trying to turn people against each other because she was afraid for her spot because they put San’niyah on—because San’niyah’s gonna be the bomb.”

She made the matter even messier by saying: “That is just the type of person she is, she is a big personality. She [Cristen] tried to say I was picking on her for being overweight and that is when I was like, ’She ain’t have no miscarriage!’ I feel like a horrible person, but it just happened. It was just like a blooper.”

As the song goes, this is one crazy situation, and it is getting more and more absurd.

What are are your thoughts on what Aja did to Cristen? 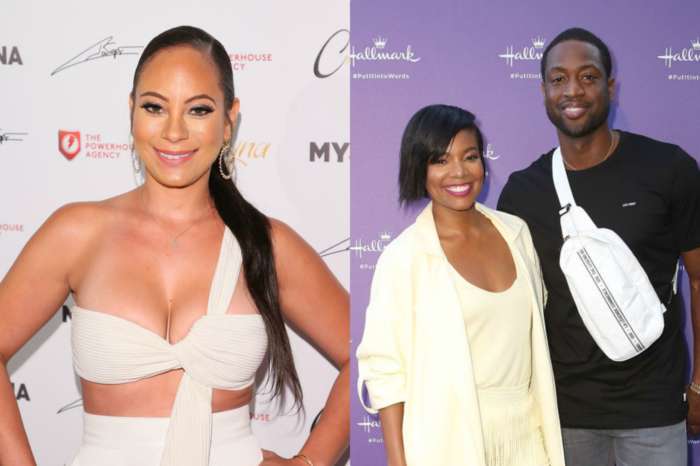 LeBron James May Want To Ban Khloe Kardashian From Cleveland Cavaliers Games During The NBA Finals - Is The Kardashian Curse Real?

So basically she’s the one that lied her sister never had a willing abortion the baby had no heartbeat god rest its soul.

Wat can I say?? Im not surprised with these two, just cuz ur sisters duznt mean u get along or even love eachother smh its sad, but true. I swear my sis might’ve been an enemy in my past life cuz shes always hated me nd I dont get it bcuz shes older than me so I was always following her around, ive always been so happy for her nd her accomplishments but shes NEVER been happy for me smh ppl think cuz we’re sisters we love eachother?? Yea right i dont even like who she is as a person. Aja was wrong to talk all that bs bout Kristen to somebody else but u kno wat tho Aja did mention how they were half-sisters nd their mothers hate one another ijs

She’s trying to secure a spot on BSKTBL WIVES.

That is why Dwayne Wade did not wife her for she is shady and classless. Who would do that to their sister on national TV? Not many with her ugly self. Cristen might be thick as thieves but she sure looks better than she does. Jealous, another Phaedra Parks. Stop her before she get started. Envious self. Just sad